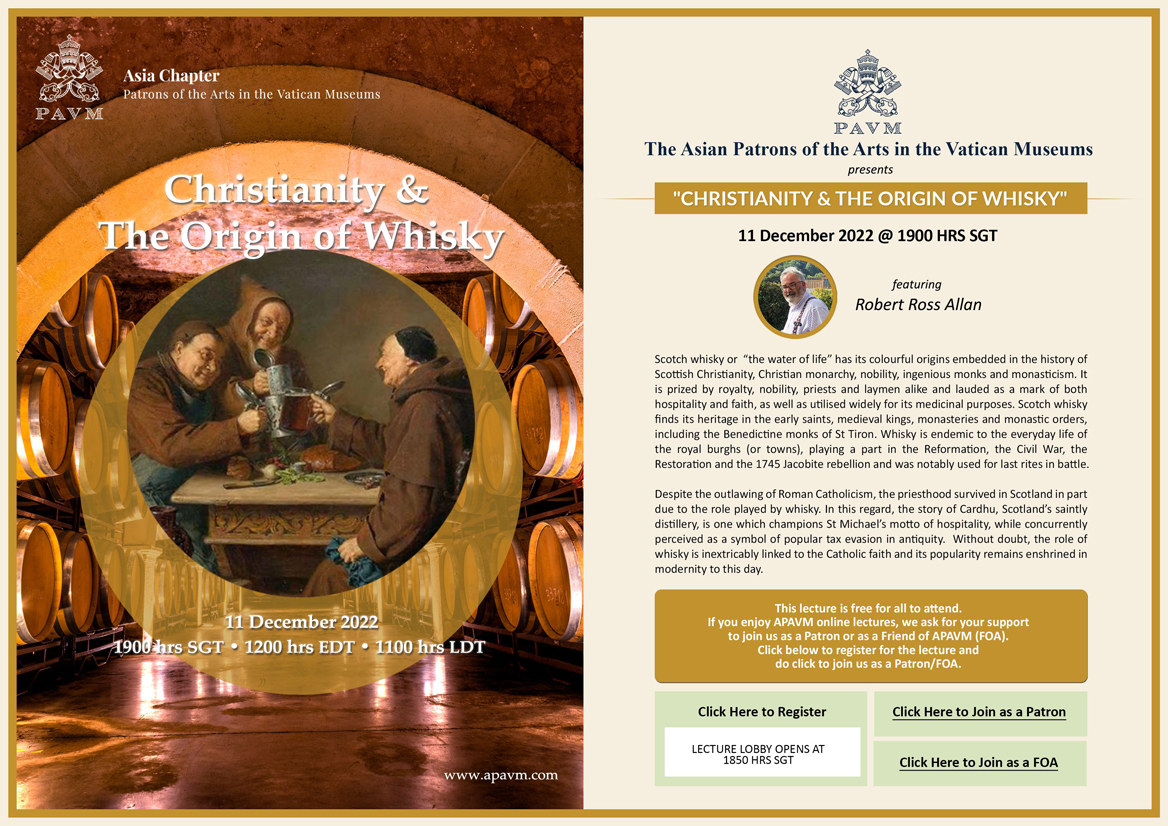 Christianity and the Origins of Whisky

Scotch whisky or “the water of life’ has its colourful origins embedded in the history of Scottish Christianity, Christian monarchy, nobility ingenious monks and monasticism. It is prized by royalty, nobility, priests and laymen alike and lauded as a mark of both hospitality and faith, as well as untilised widely for its medicinal purposes.

Scotch whisky finds its heritage in the early saints, medieval kings, monasteries and monastic orders, including the Benedictine monks of St Tiron. Whisky is endemic to the everyday life of the royal burghs (or towns), playing a part in the Reformation, the Civil War, the Restoration and the 1745 Jacobite rebellion and was notably used for last rites in battle.

Despite the outlawing of Roman Catholicism, the priesthood survived in Scotland in part due to the role played by whisky. In this regard, the story of Cardhu, Scotland’s saintly distillery, is one which champions St Michael’s motto of hospitality, while concurrently perceived as a symbol of popular tax evasion in antiquity. Without doubt, the role of whisky is inextricably linked to the Catholic faith and its popularity remains enshrined in modernity to this day.

Whilst at the University of St. Andrews he read: Scottish History, Geographical Studies and Theology, (at Scotland’s oldest theological college; St. Marys) gaining a Master of Arts degree.  Following his studies at the University of Strathclyde Bob received his Master of Business Administration degree after which he achieved a postgraduate diploma in Manufacturing Management from UMIST (the University of Manchester institute for Science and Technology).

During his time as a student at St. Andrews Bob held the position of Senior Vice President of the Student Union, was a member of the committee of the Canmore Roman Catholic Chaplaincy and was voted Senior student of St. Salvator’s hall of residence (1989) the hall attended by HRH Prince William.